Administration & Board of Management

Composition of the Governing Body of Ramakrishna Mission (with Headquarters at Belur Math), which is the Sponsoring Society of RKMVERI (Deemed University) as on 28 August 2021. 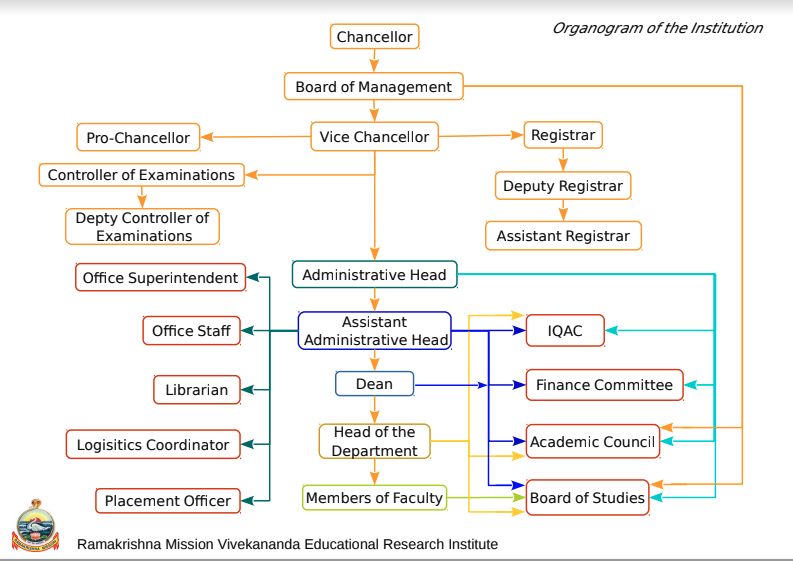 Consistent with this administrative structure, Ramakrishna Mission Vivekananda Educational and Research Institute (RKMVERI), with its head office located at its Belur Math campus, is administered through the following tiers: The Chancellor, being the General Secretary of RKMM ex-officio, is at the helm of affairs of the university as the President. The Chancellor’s Representative, who is an Assistant Secretary at the headquarters of RKMM, is to be the second-in-command to assist the Chancellor in the administration of the University. The Vice Chancellor, who will usually be a qualified and competent monk of the Ramakrishna Order, appointed according to University Grants Commission (UGC) guidelines, will be in charge of the day-to-day administration of the University and all its academic programmes and activities. Administrative Heads of the various off-campus faculty centres of the university, who will be the ex-officio heads of the branch-centres in which the faculty centres are located, will be in charge of the day-to-day administration of the respective faculty centres.

Board of Management of RKMVERI (Deemed University):

Board of Management reconstituted as per UGC’s revised Regulations (in Gazetted Notification dated 20 February 2019, vide Section 10.05).  Effective from 22 August 2021.